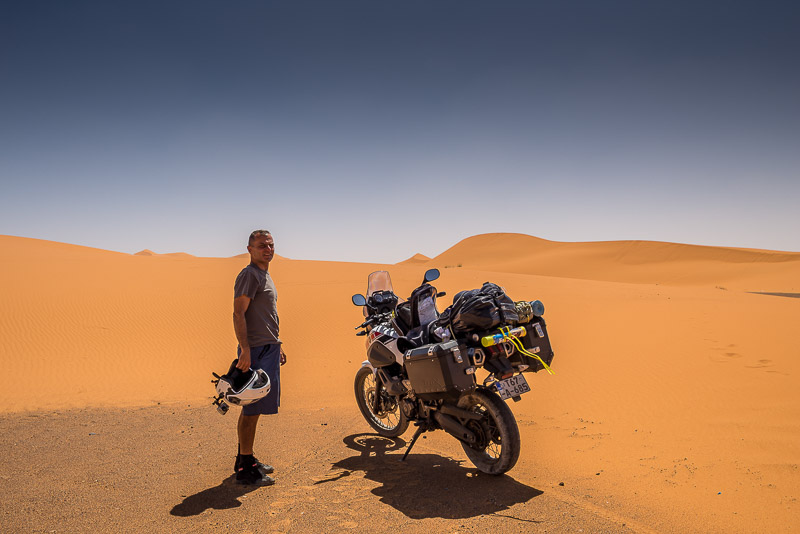 The end of the road and the beginning of Sahara desert.

I've been seeing ride reports about Morocco. Morocco is a popular destination for people from the UK mostly because of UK's miserable climate. A short ferry ride from home, they are in sunny Spain and soon after in Morocco. For me, it was quite a bit further. All together, I was looking at a 15,000 km round trip.

I figured three months should be enough and I chose a shoulder season August-October. I took my chances with weather in October and it worked out pretty ok. 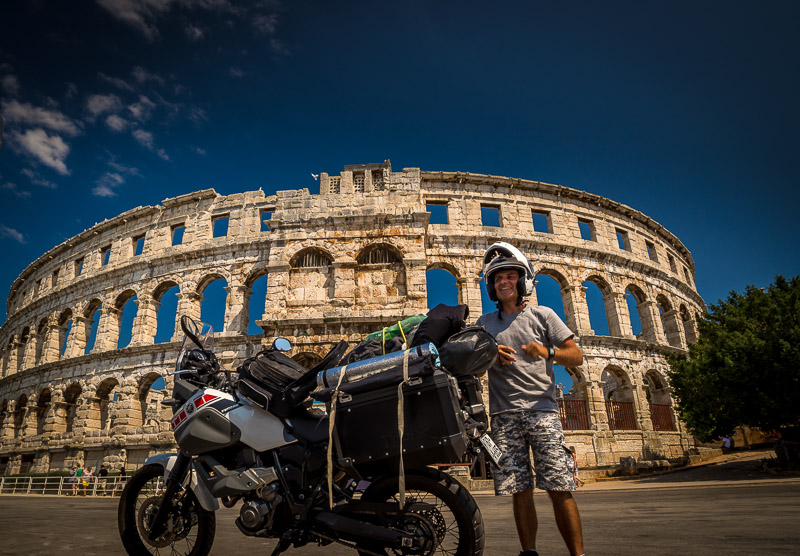 Roman amphitheater in Pula, Croatia. Croatia is fairly expensive, especially considering what one gets for the money. It does have nice coastline and the sun-starved people from northern Europe can't get enough of it.

Italy and Dolomites are only a day ride from Serbia if one uses motorways. I, however, prefer slower, secondary or tertiary roads. So, it took me three days to ride across the mountains to the Adriatic sea and up along the Croatian coast to get to Trieste. 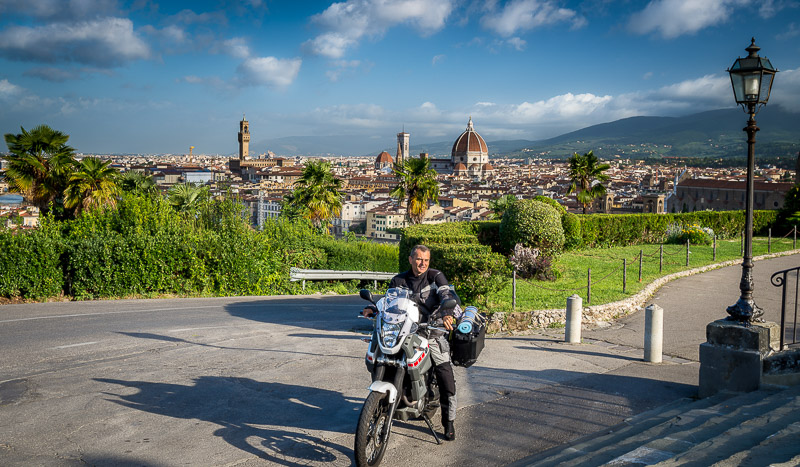 A viewpoint above Florence. 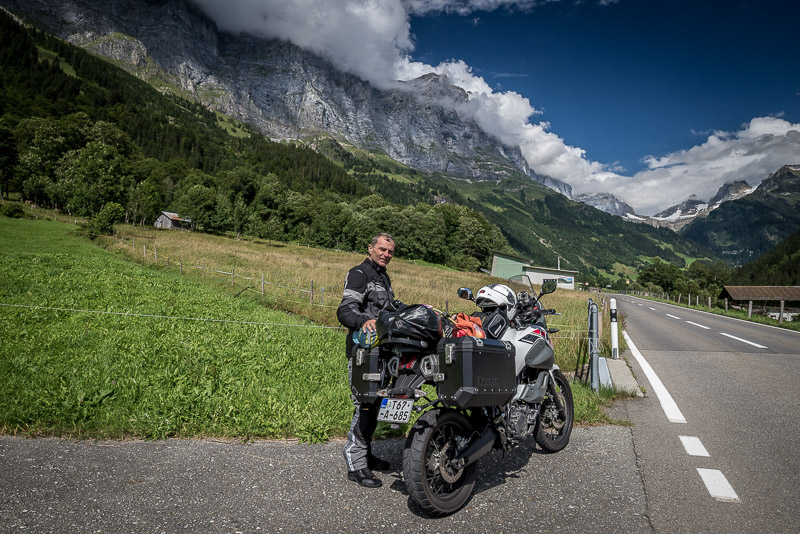 I rode along the border between Italy and Switzerland, crossing every single pass there was. . 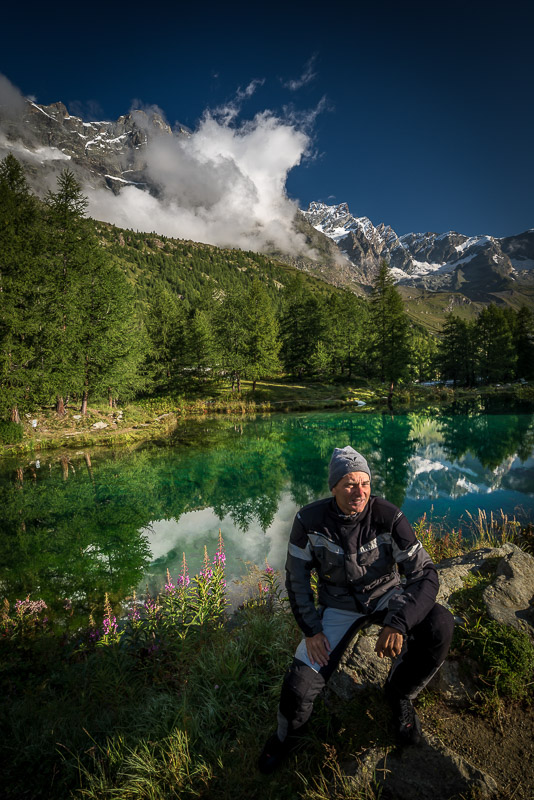 A lake in Aosta valley. 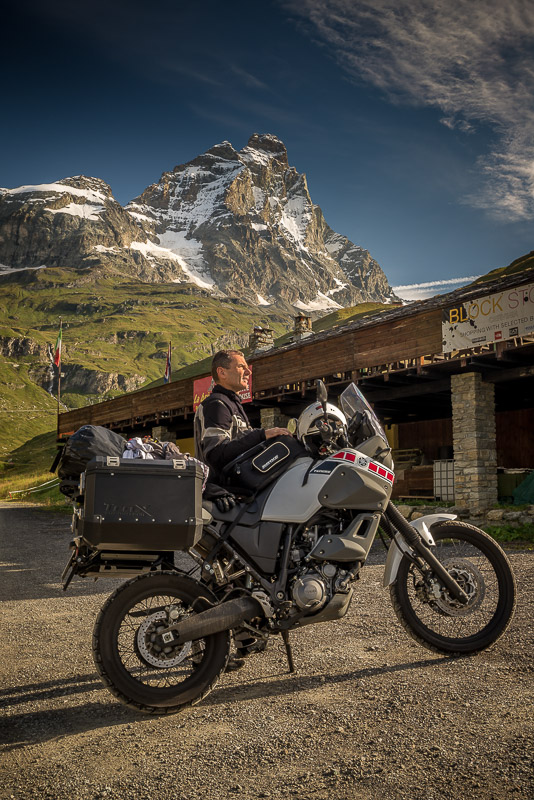 Cervino - Italian side of Matterhorn. 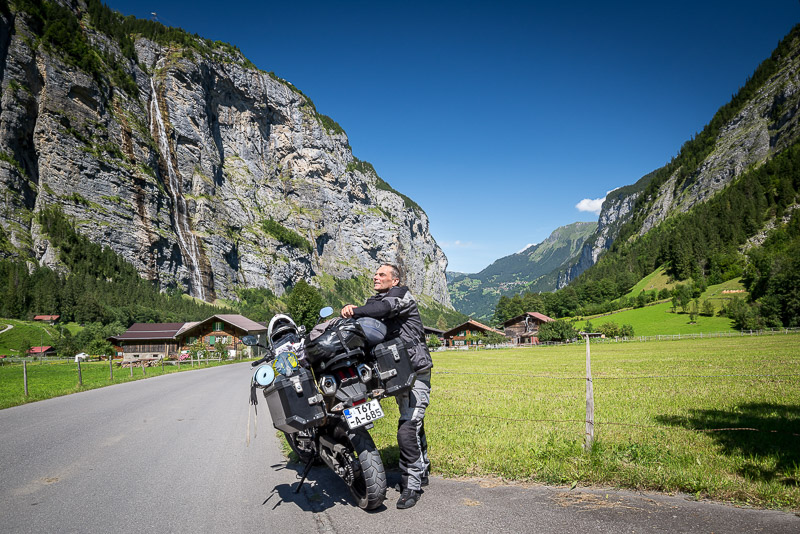 Lauterbrunnen valley - very picturesque with steep walls and high waterfalls. This is a mecca for base jumpers and paragliders.

From Aosta valley, I took a most direct route through France to Andorra. Andorra is a beautiful city, with interesting architecture, but people turned it into an giant shopping mall. Couldn't wait to get out. 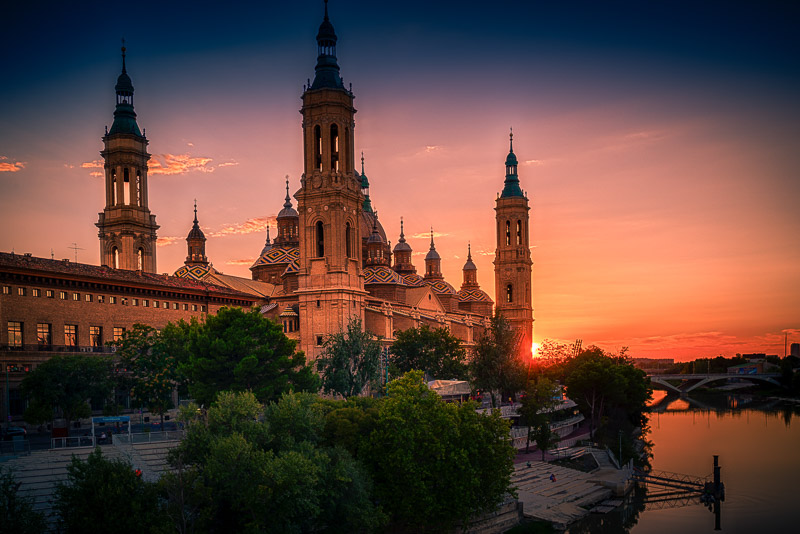 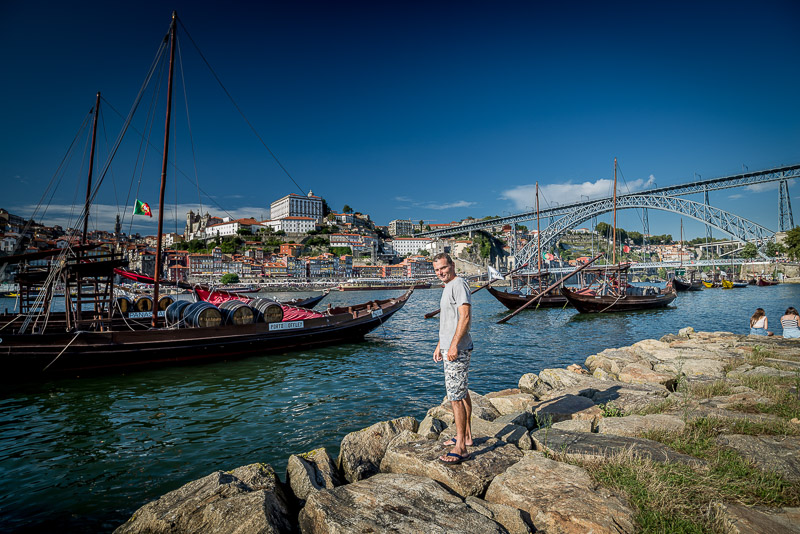 Porto boats that bring in wine from vineyards up Douro river. 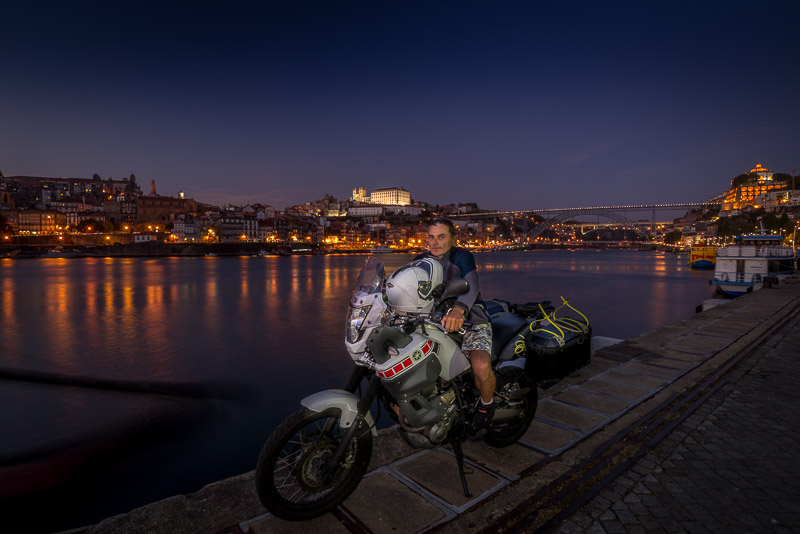 Lisbon is half a day ride away from Porto. It's situated on a number of hills, reminiscent of San Francisco, together with cable cars and a suspension bridge that was build by the same company that built Golden Gate Bridge. They didn't bother to change the design, it seems.

It is easy to see that this used to be a grand city, when labor and goods from the colonies were cheap. But today, many buildings are poorly maintained. However, people were very friendly and happy. I guess that's what counts the most.

One day, I made a trip to the westernmost point of the European continent - Cabo de Roca. I visited Pena castle on the way there and passed by busy beach towns on the way back to Lisbon.

From Lisbon, I went south through endless plantations of cork. Portugal is world's largest producer of cork. Eventually, I hit Faro, at the southern coast of Portugal and crossed back into Spain. At this point, I was getting itchy to actually cross onto the African continent. 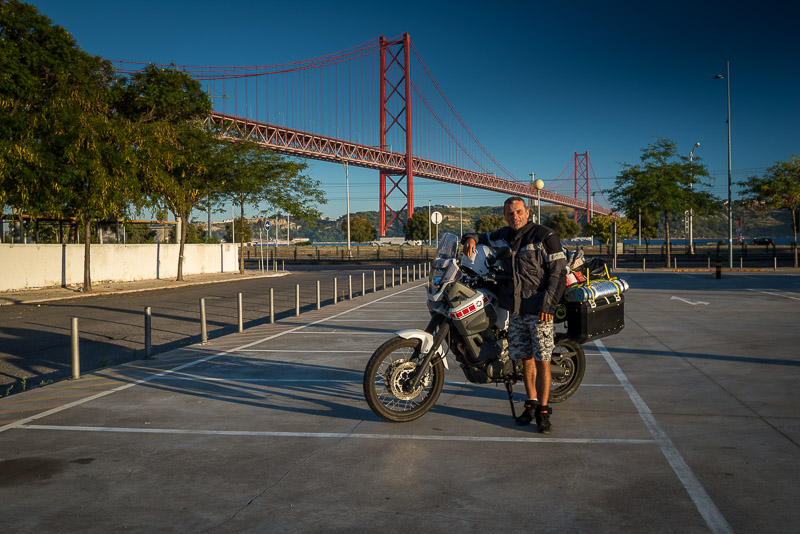 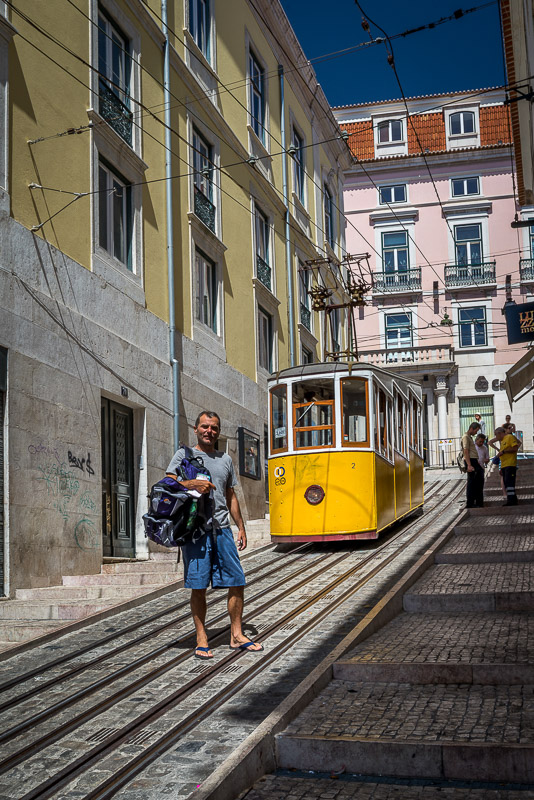 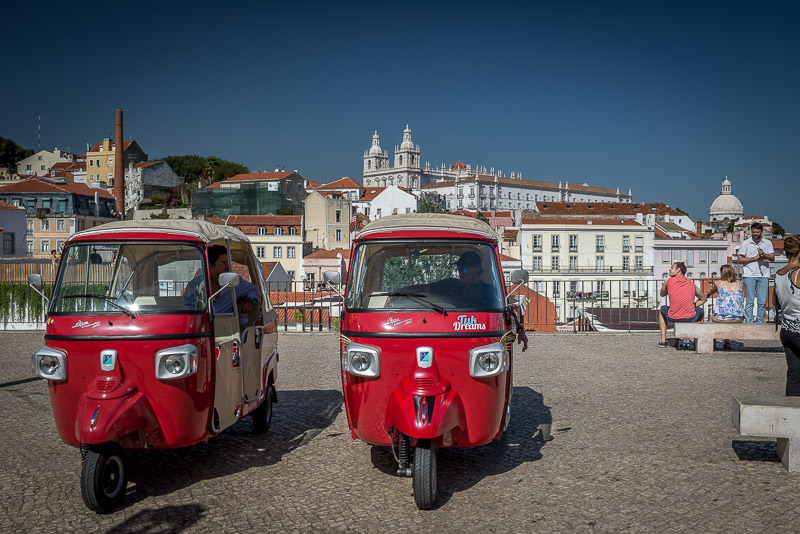 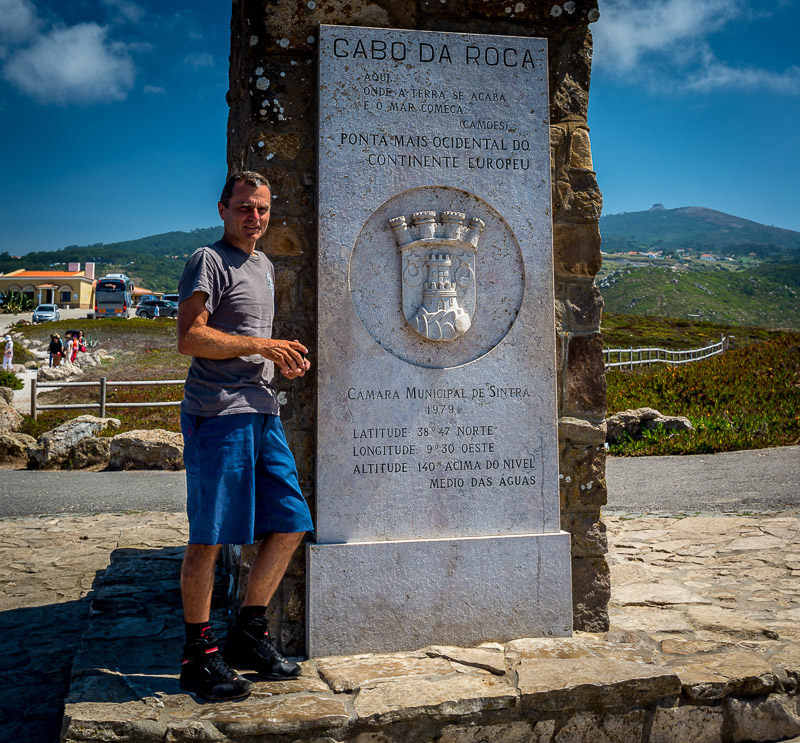 Finally, the time to bid farewell to Europe has come. I rode straight to the ferry port in Algeciras. There are numerous ferries connecting Europe and Africa near the Gibraltar. I simply showed up, bought the return ticket and boarded a ferry to Ceuta, the closest Moroccan port. We passed towering Gibraltar and before too long, it was time step onto the African soil. Even though geographically close, Morocco and Spain are worlds apart.

After changing money, I could finally eat and look for accommodation. First night I spent in seaside resort town of Martil, near Tetouan. Tetouan was busy because the king was staying in Tetouan, in one of his many palaces. Martil, on the other hand, was busy with holidaymakers. I checked out old town and had some tea in ubiquitous tea houses.

I've heard a lot about the Blue City of Morocco - Chefchaouen. Houses in the old medina of this hilly city are all painted in blue, hence the name. 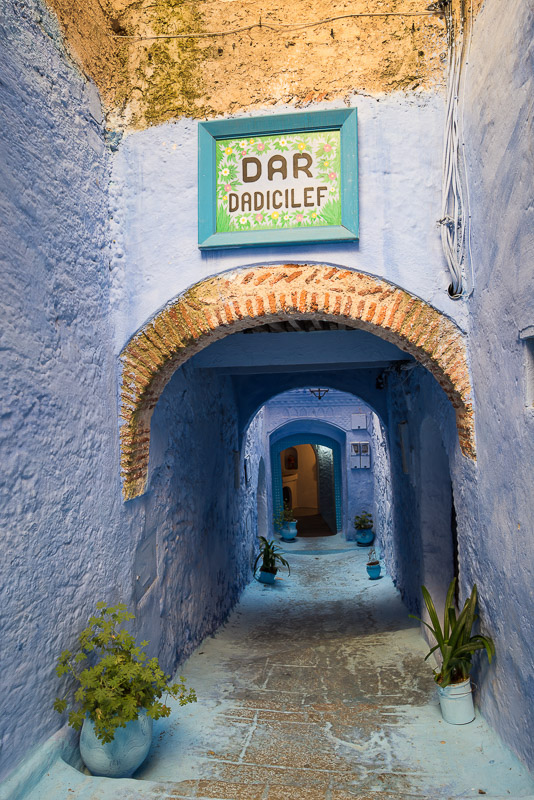 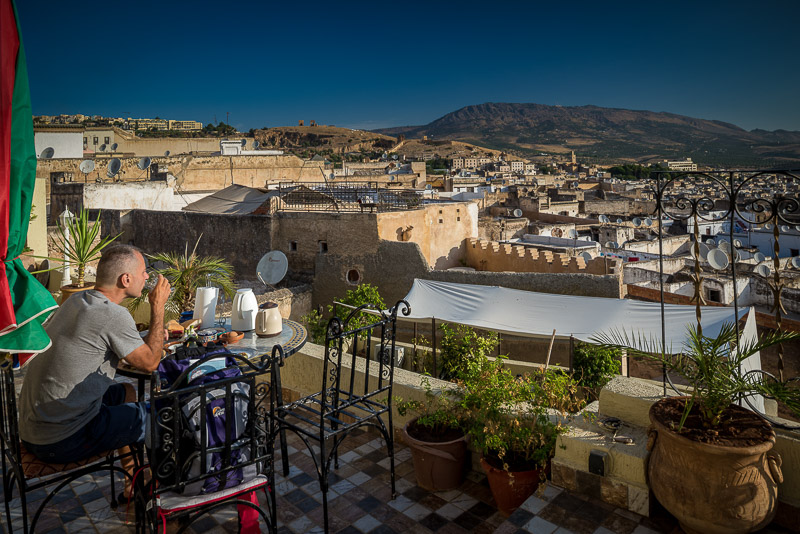 Breakfast in Fes. Many guesthouses in Fes have roof-top terraces where they serve breakfast. This one had a great view of this old city.

Next on my list was Fes. After a beautiful ride through olive plantations and over some mountains, I arrived in Fes. Medina of this old city is simply amazing. It's a maze of narrow alleys going up and down hills. Bigger, commercial, alleys are filled with restaurants, shops and tea houses. Other, quieter ones are simply residential alleys. Even though there are some touristy restaurants and shops, this is a normal, living, breathing city and not a tourist trap. 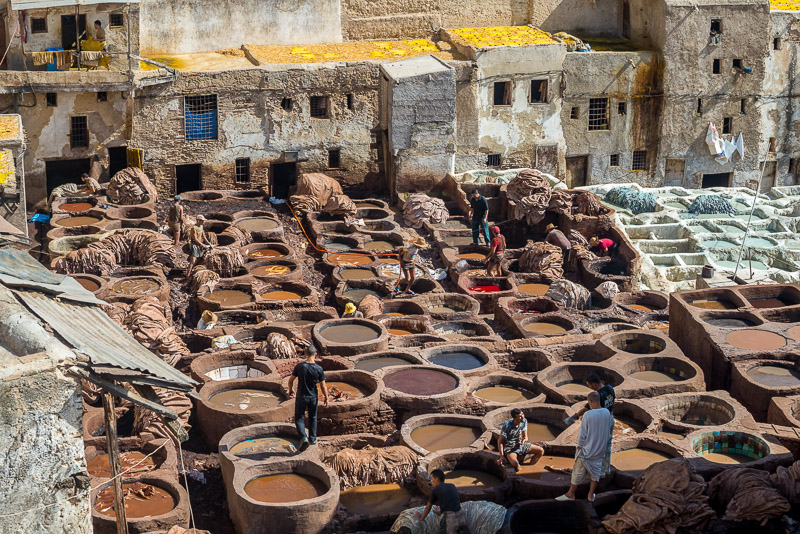 Leather production was and still is a very important part of the economy of this city. This tannery is situated in the middle of the medina. 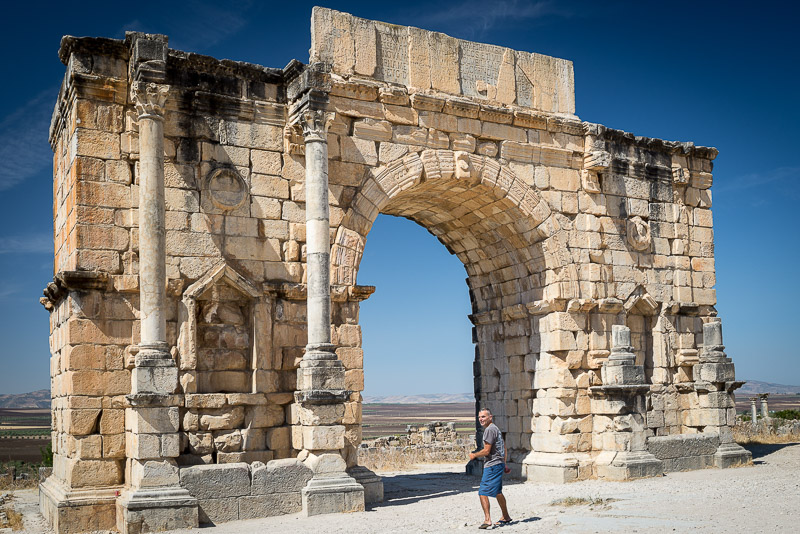 Romans came all the way to Morocco. This gate of the old city of Volubilis mart the start of the road to Rome. 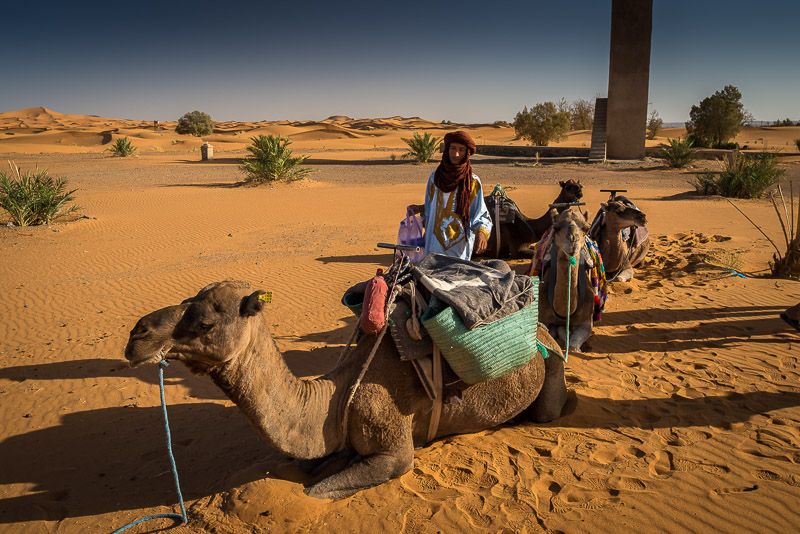 Camel handler waiting to take us into Sahara. 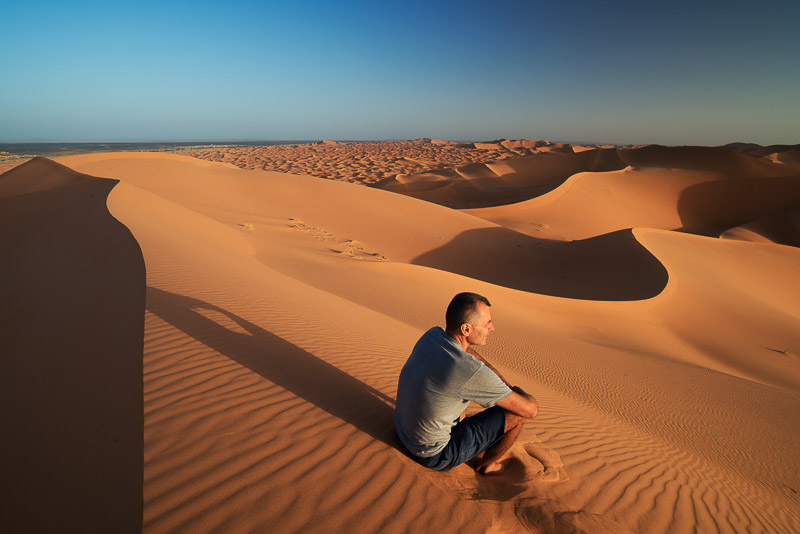 Enjoying Sahara sunrise atop a dune. 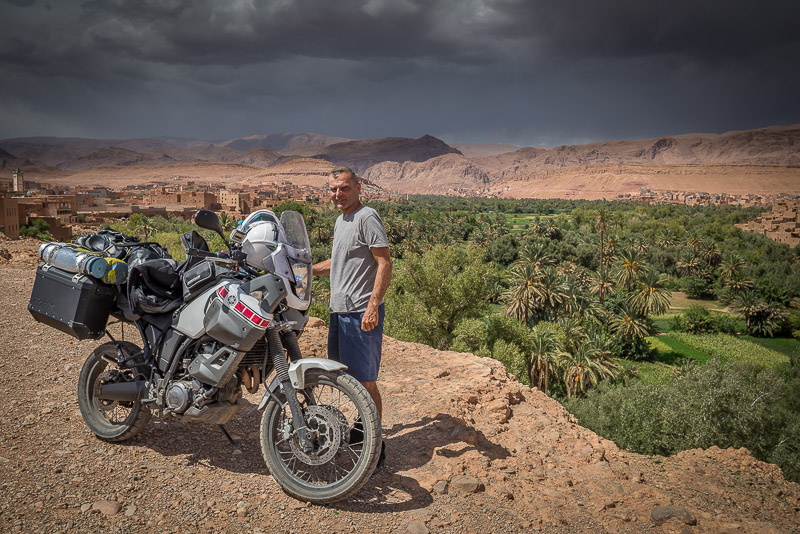 Reaching Sahara marked the apex of my trip. It was time to start thinging about getting back home. The weather was already starting to change for cool, with occasional storms passing through. I thought Morocco was drier.

Quarzazate is the movie capital of Morocco. A few Hollywood movies were filmed there as well. Unfortunately, September is a gloomy month in this part of Morocco, so I move on quickly. 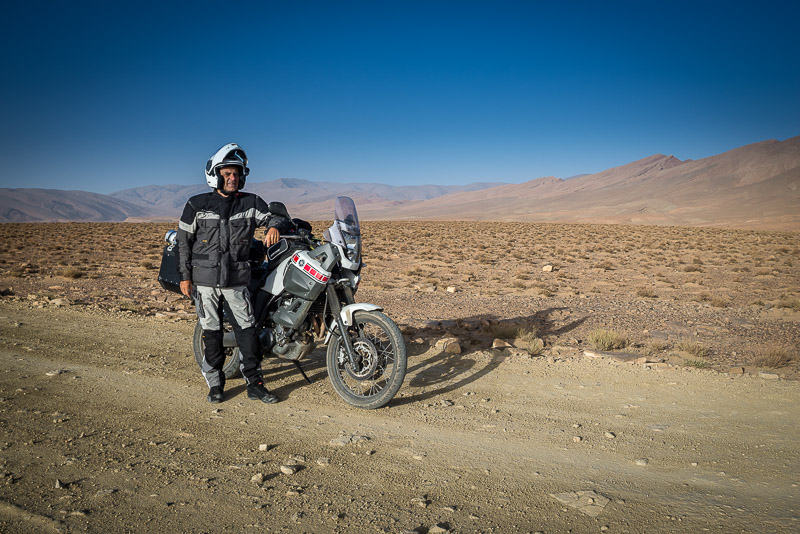 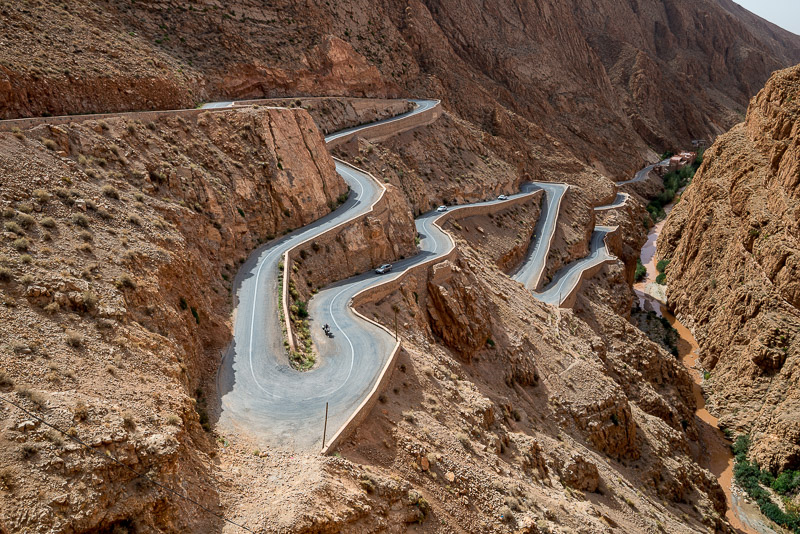 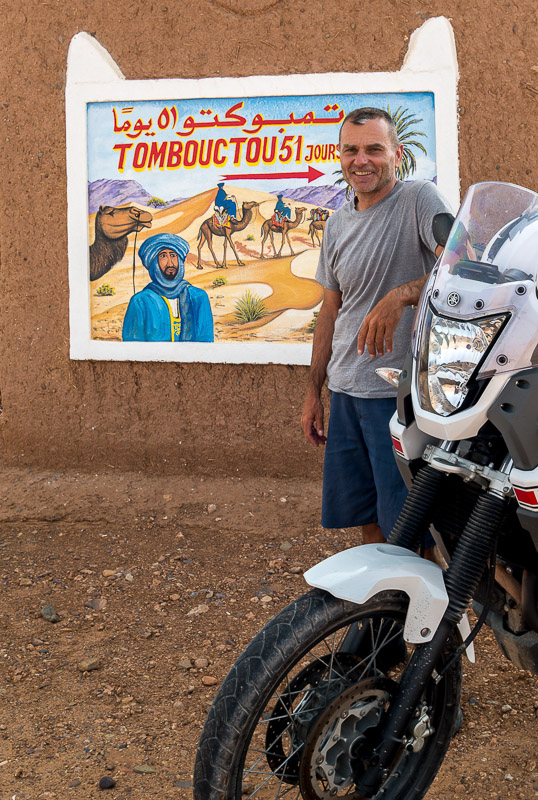 The road to Tombouctou. 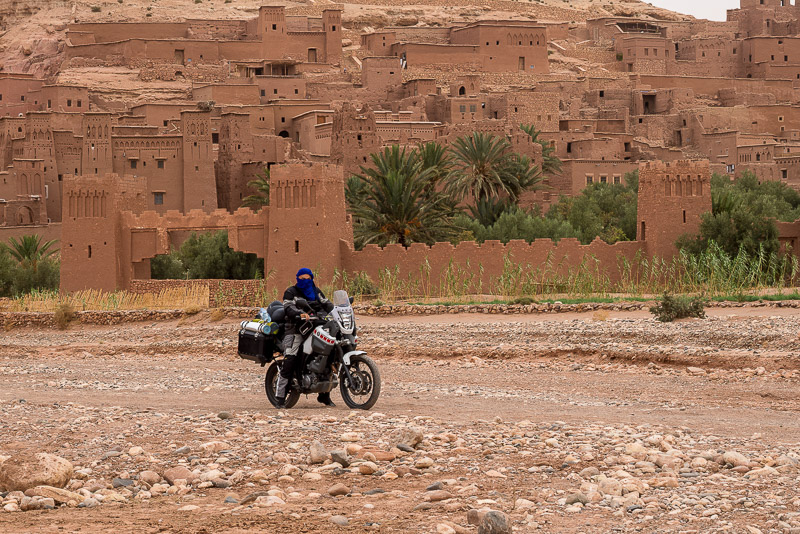 This town was featured in some movies. Hollywood and local studios produce many movies in this area. 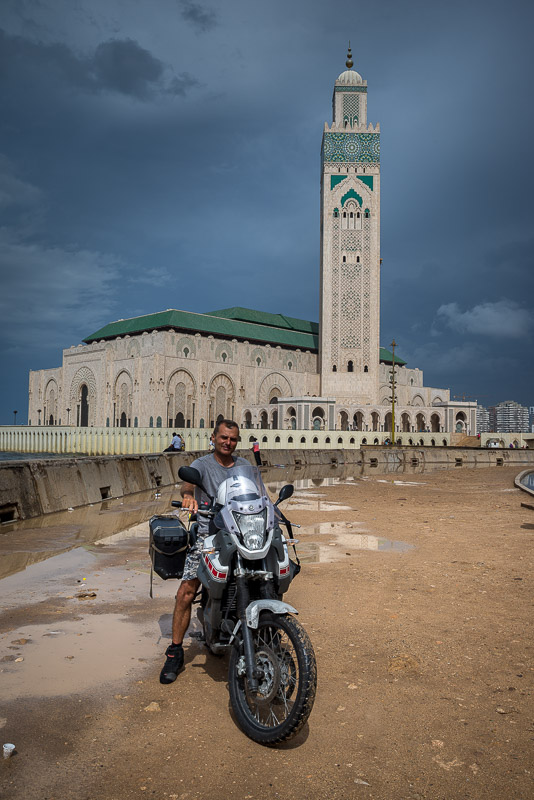 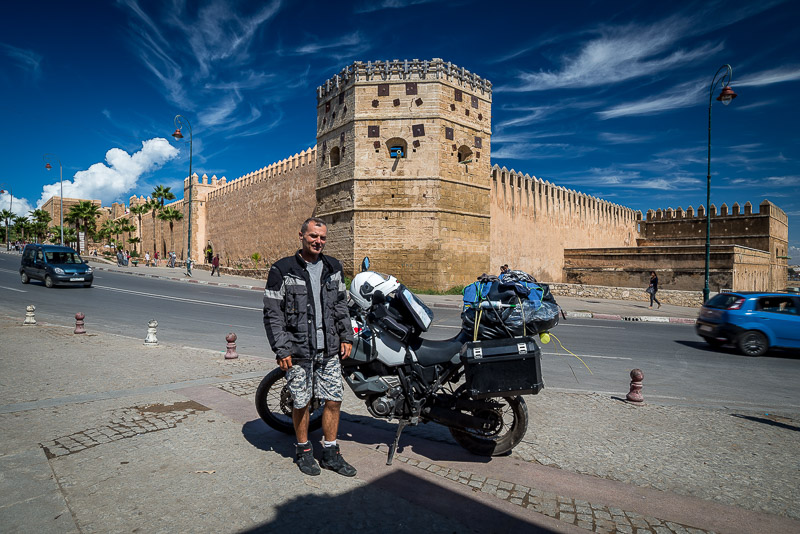 Rabat fort - corsairs' hangout once upon a time.

Back through Spain, France and Italy

From the Gibraltar, I took the most direct route along Costa del Sol, Costa Brava, Cote d'Azur and Liguria. 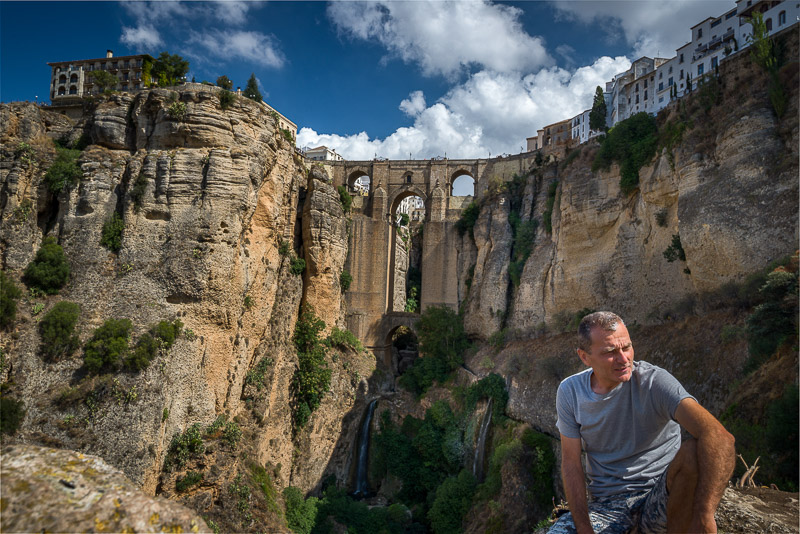 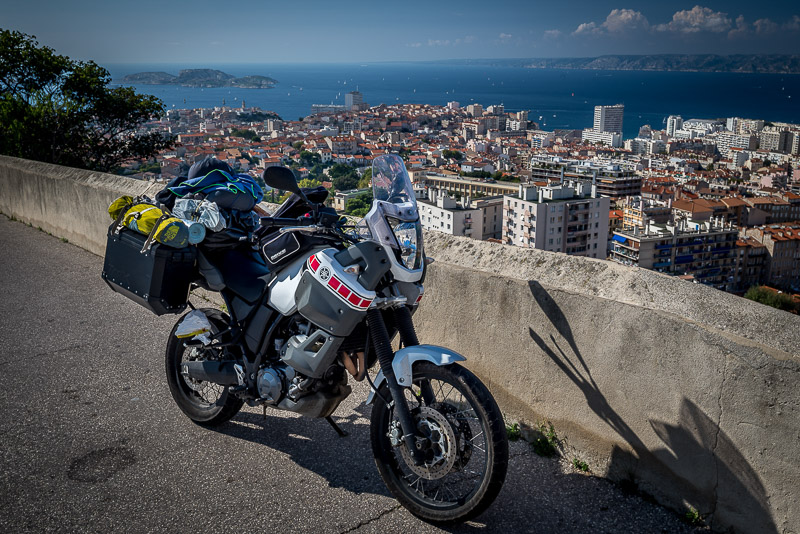