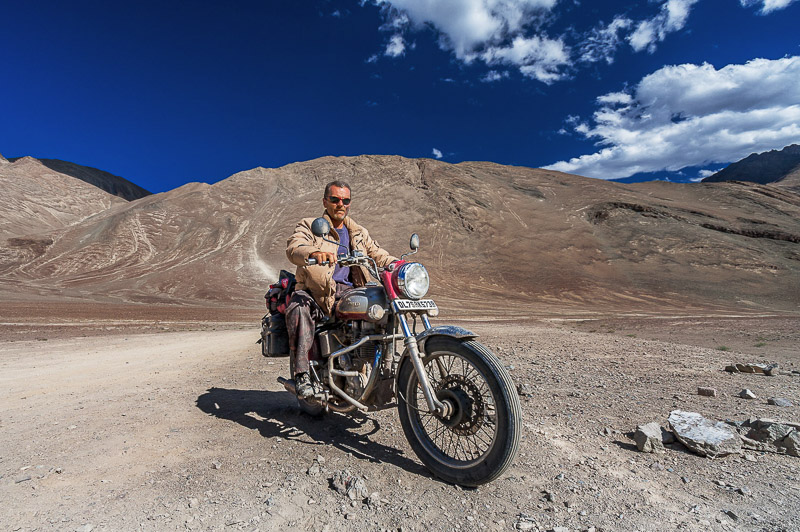 Moon-like scenery of the Himalayan plateau and my trusty Enfield.

If Kashmir, Ladakh and Himalayas do not evoke the feeling of adventure, then what does? Riding around India is always an adventure. But heading up north, into the world's highest mountains, is an experience hardly found anywhere else in today's modern world.

Karol Bargh is the place to get anything motorcycle-related in Delhi. I arrived early monday morning looking to rent a bike. Bad idea! Most shops are closed on mondays in Karol Bargh. After going around, I managed to find one Royal Enfield for the trip north.

The next day, I woke up before the dawn to avoid Delhi traffic. By the time sun was out, I was already out of the city. I decided to make the loop clock-wise because altitude gain is more gradual. Manali-Leh road climbs rather suddenly and most travelers experience altitude sickness. Going clock-wise, I would descend this steep section of the road. 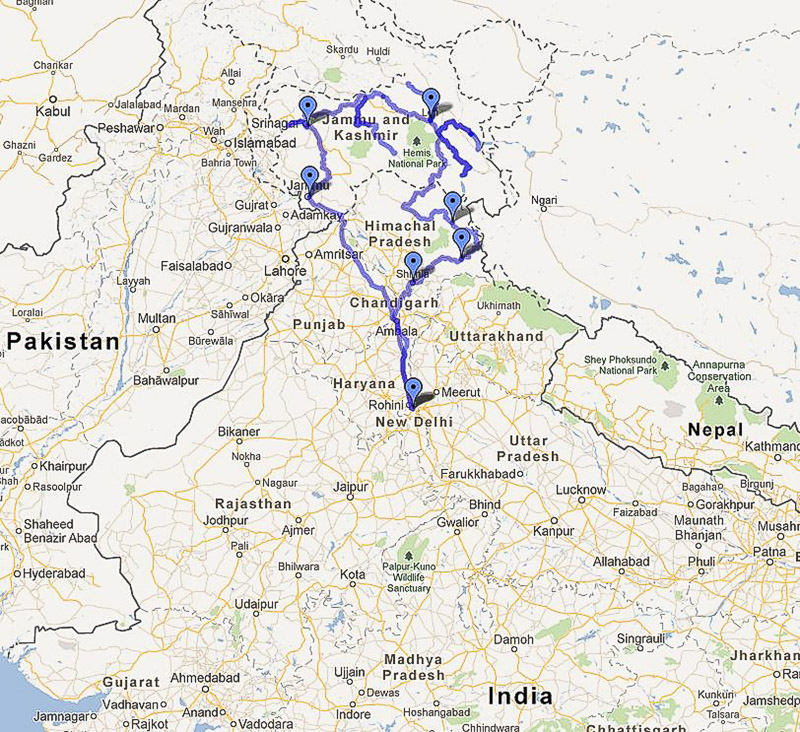 The route I did in clock-wise direction. 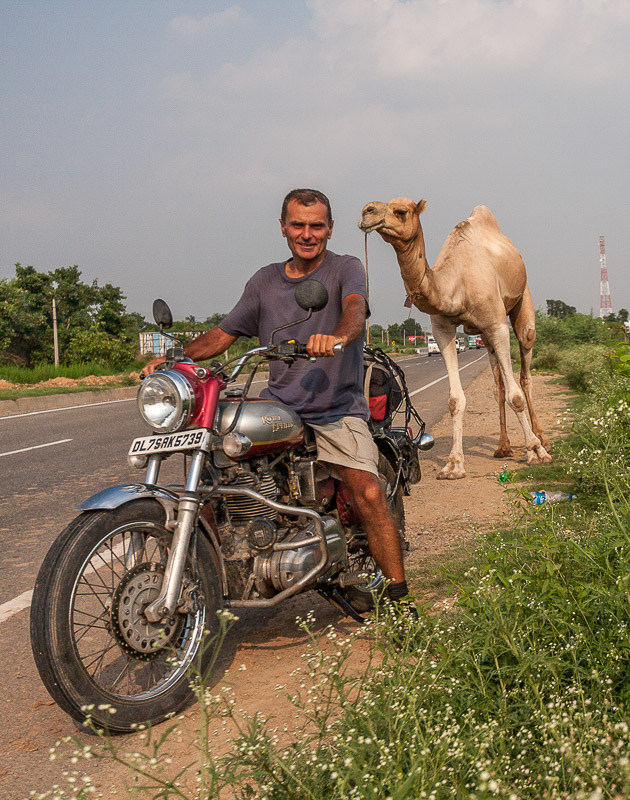 Not far outside Delhi, camels on the road. A good omen, for sure.

The first day of riding was the usual Indian road fight with other drivers, cows, dogs and even camels. But past Jammu, the road slowly climbs up and scenery becomes more interesting. 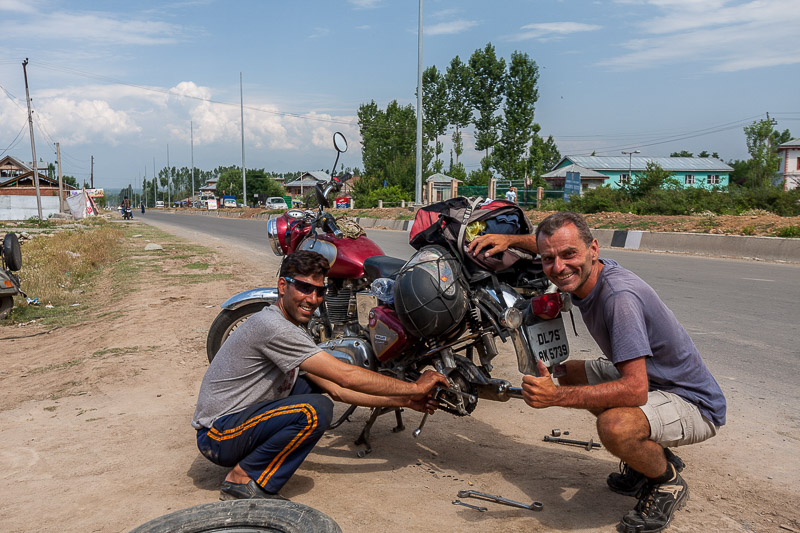 After dozens of flats, my friends asked me " what is it about you and flat tires." Indeed, no trip can go without one. On this trip, a piece of inner wiring of the tire punctured 2 tubes. No tubes were available for the next 2000 km in the remotest areas of the Indian Himalayas.

Srinagar is situated at a beauiful lake with many houseboats, which are the main tourist attraction. During colonial times, the British could not own the land, so they had their houses on the water. 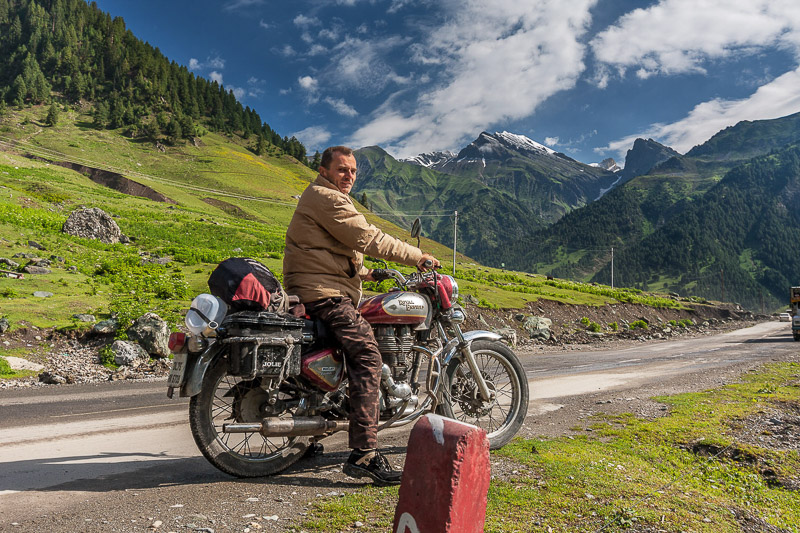 Verdant Kashmir mountains. Too bad for all the religious tensions in the region. The history of Kashmir is very interesting and sad in a way. 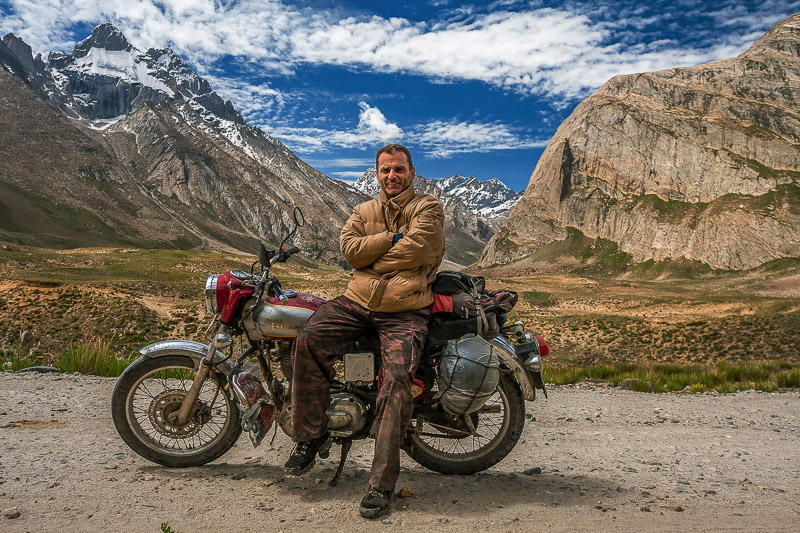 Zanskar valley - wild, remote, breathtaking and without petrol stations. Manged to get only half way in because I did not bring enough petrol. 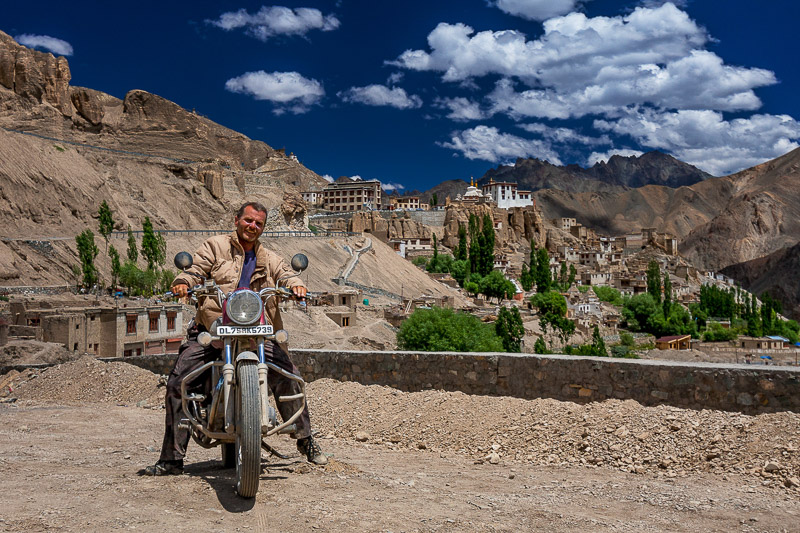 Tibetan monasteries on the way to Leh. This part of India is inhabited mostly by Tibetans. Indians from other parts of India need a special permit to visit the area. 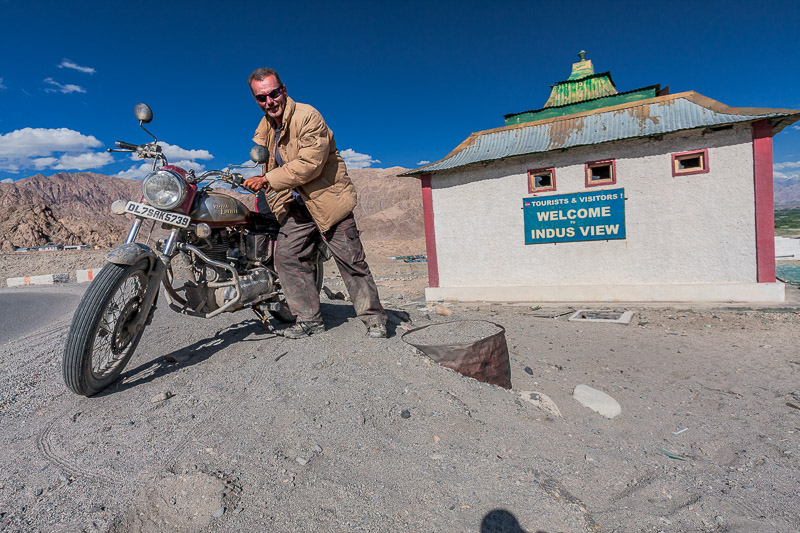 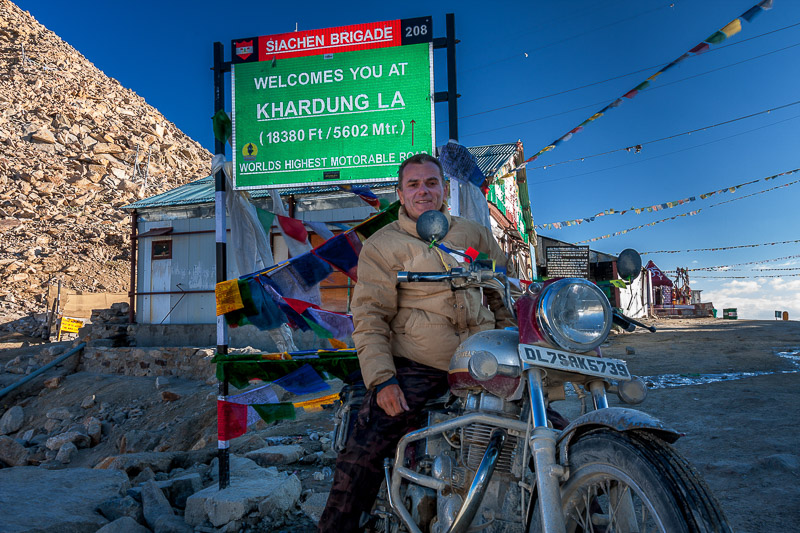 Even though there are higher passes in India, this one claims to be the highest. It is certainly the highest easily accessible road. 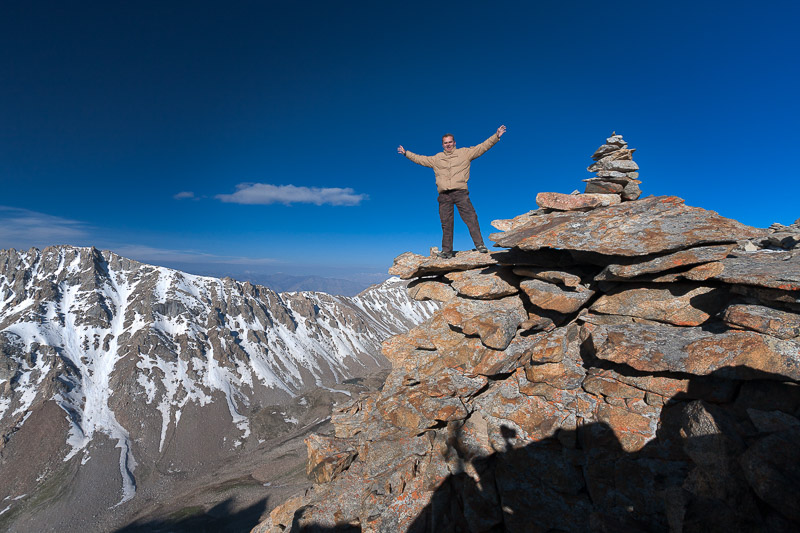 Highest I've ever been. 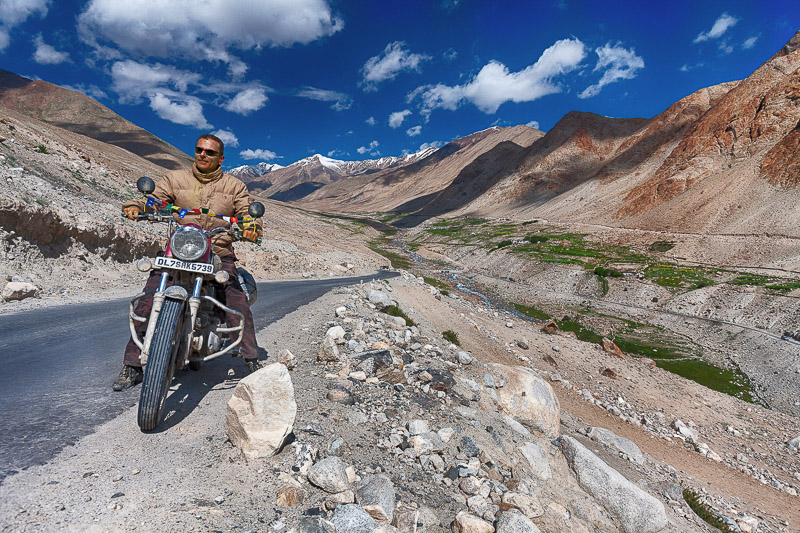 The "other" side of the Khardung La pass, Nubra valley, feels incredibly remote. Unfortunately, petrol supply is problematic here as well.

A monastery in Nubra valley. 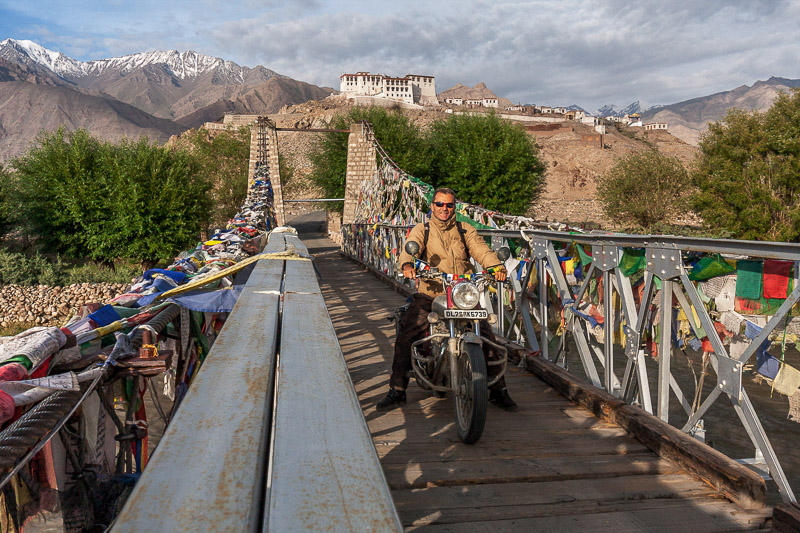 Bridges, passes, even curves are decorated with prayer flags - can't have too much good luck when riding in India. 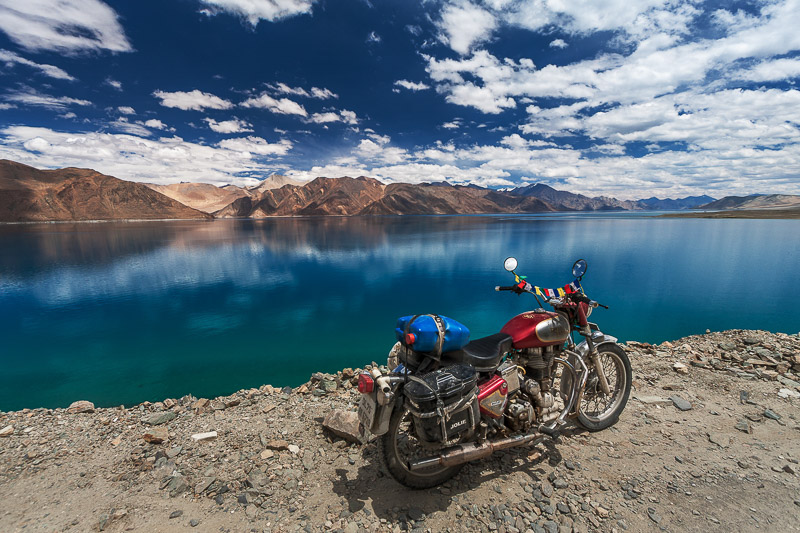 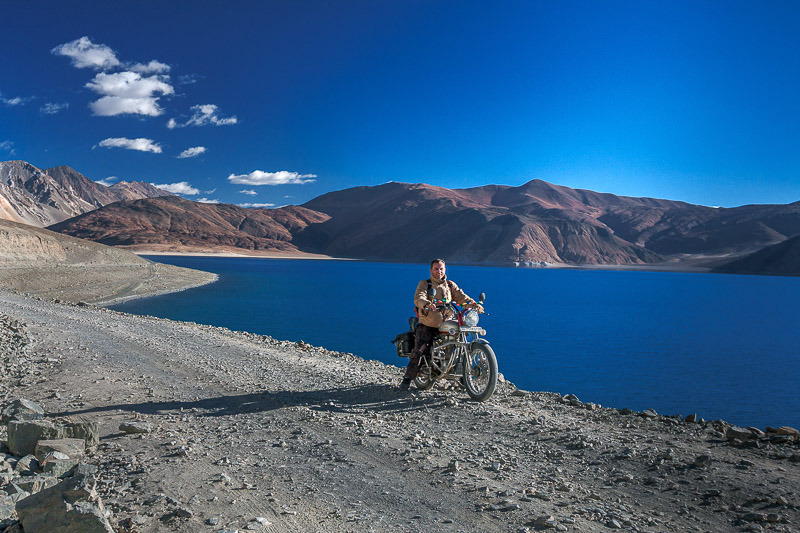 Not much traffic up here. 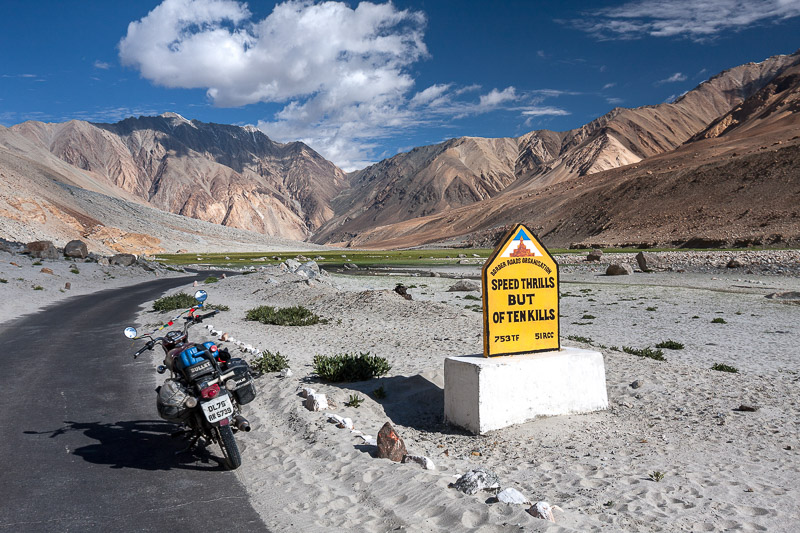 Indian Himalayan roads are littered with witty signs warning drivers to be careful. 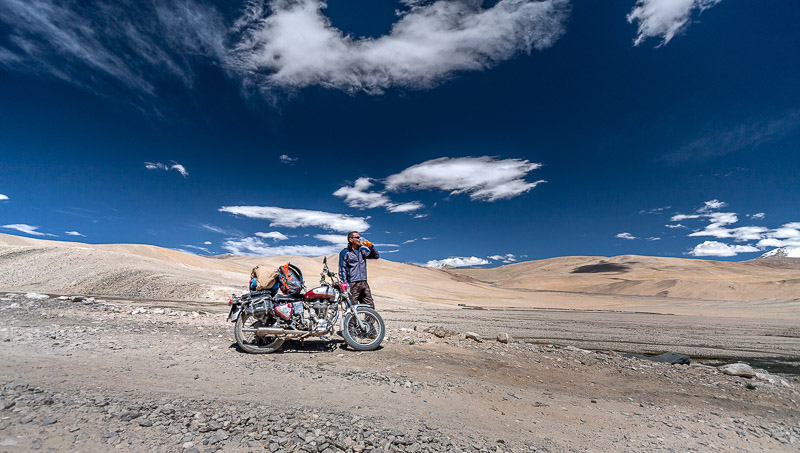 Nice and warm during the day, but bitter cold at night. 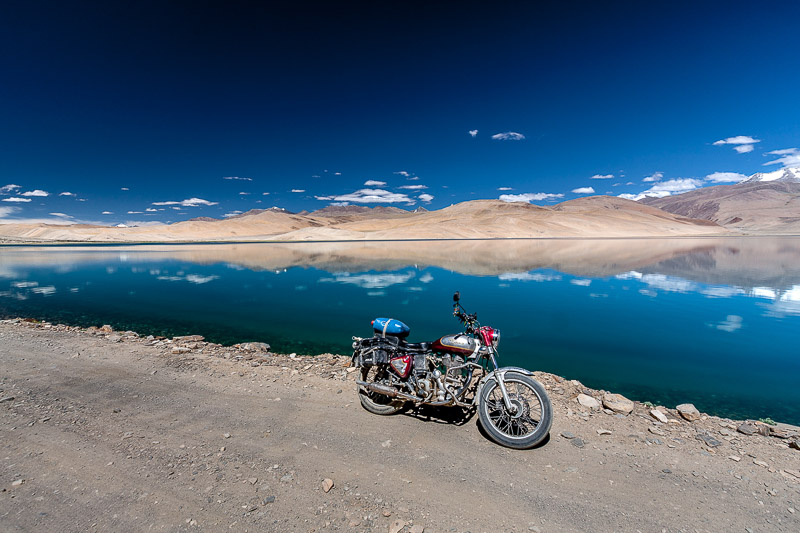 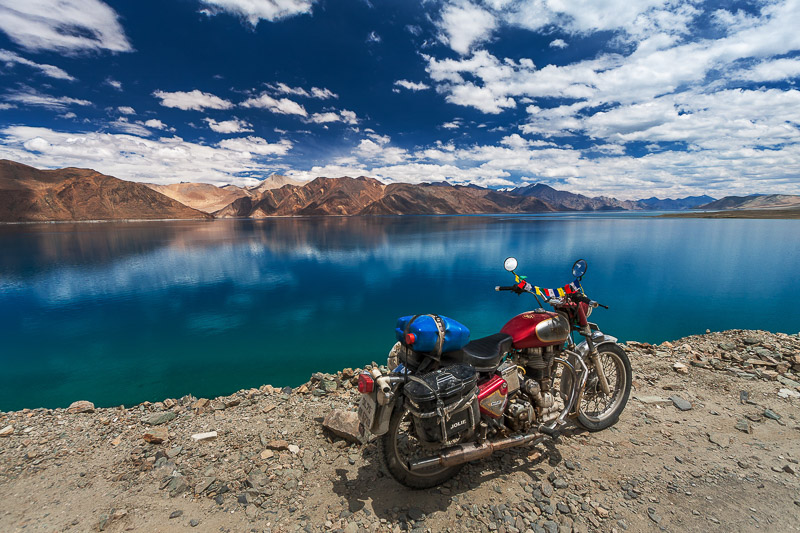 There are many lakes on the Tibetan plateau. All crystal-clear and cold. Climate up here is very harsh - sun is burning and it's cold in the shade even on a mid-day in August. 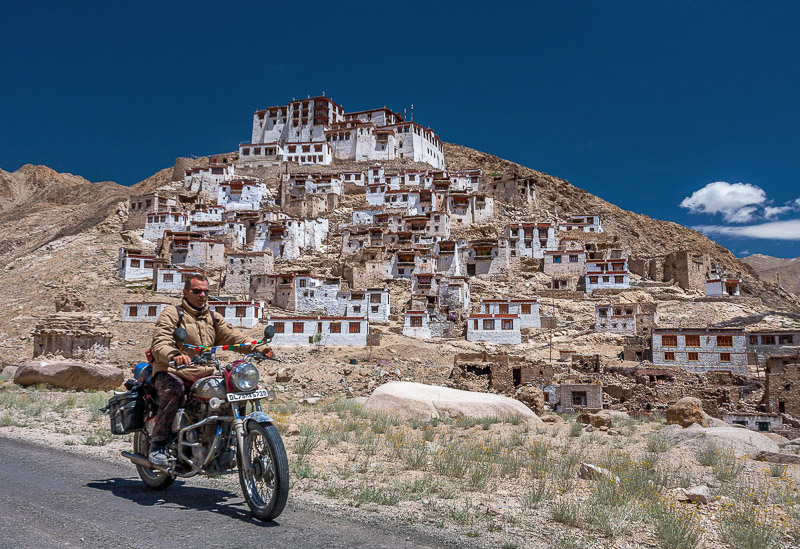 Tibetans like to build their villages perched on mountain sides with the main temple on the top. 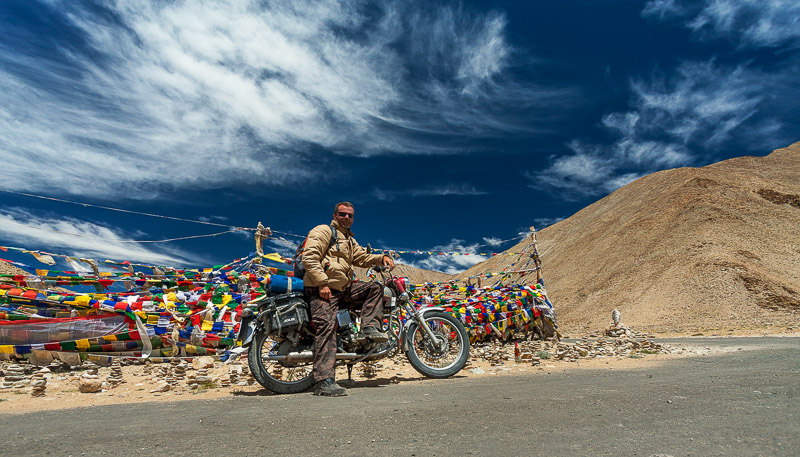 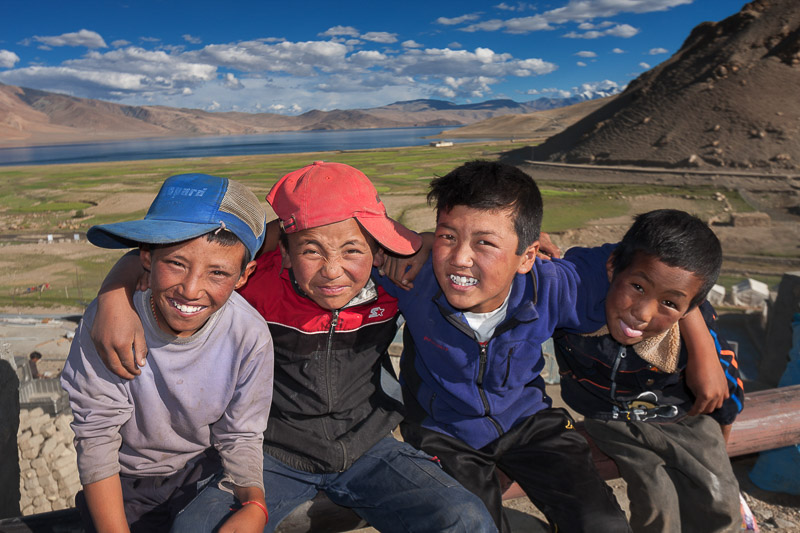 Joyful kids wanted me to take a photo of them. 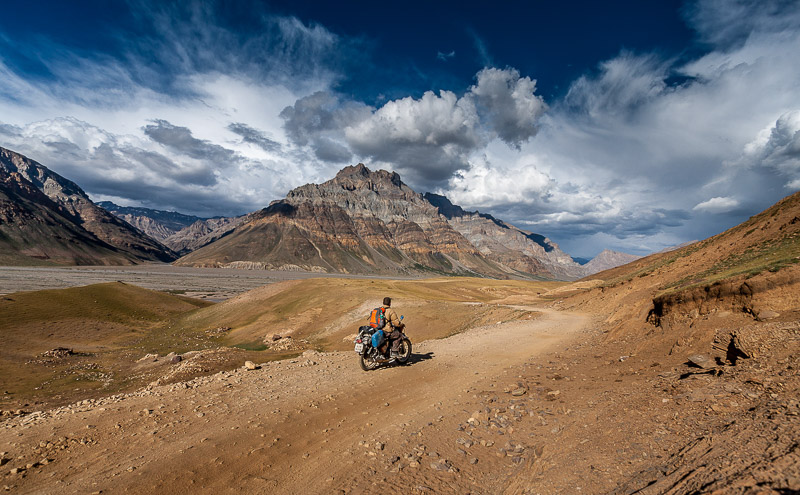 As always, I was worried about taking the road to the Spiti valley, especially starting in the afternoon. There were some gushing creeks and passes to cross, but as always, it turned out to be the best experience of the trip and one of the most memorable roads I've ever ridden. Years afer, I am longing to go back and enjoy this road at a more leisurely pace. 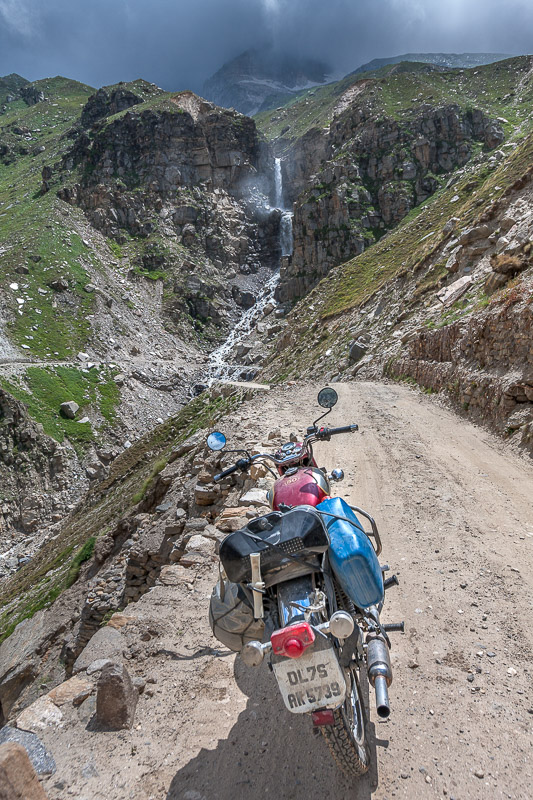 Crossing the run-off from this waterfal gave me grief. The water was swift, big submerger rocks, small wheels and low clearance of my Enfield almost made me turn back. 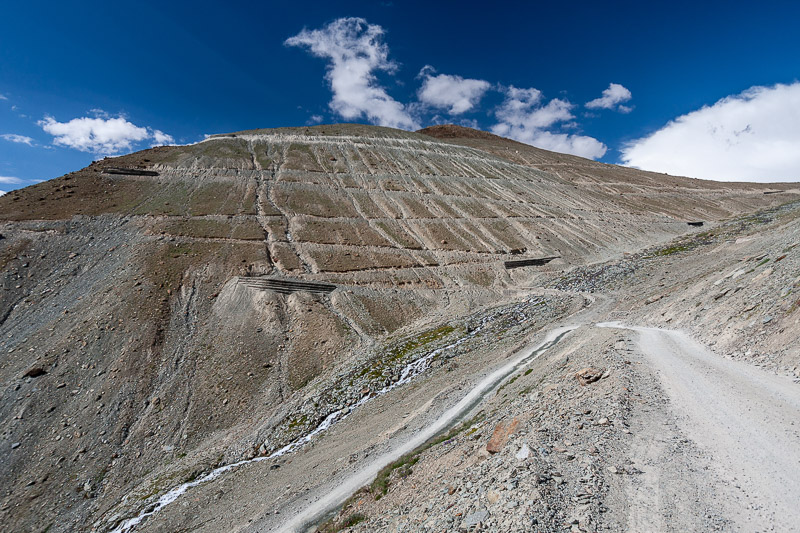 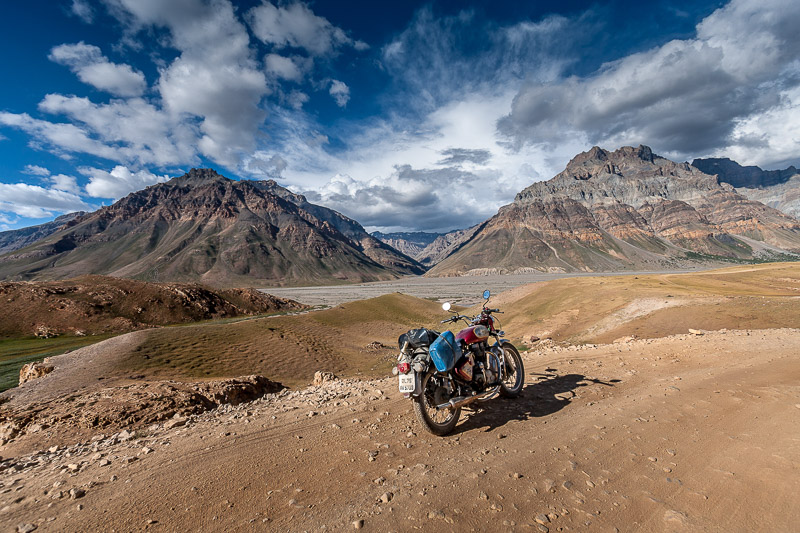 Still no people. In half a day on the road, I saw only one jeep and a group of motorcyclists going the other way. If something goes wrong here, you're on your own. 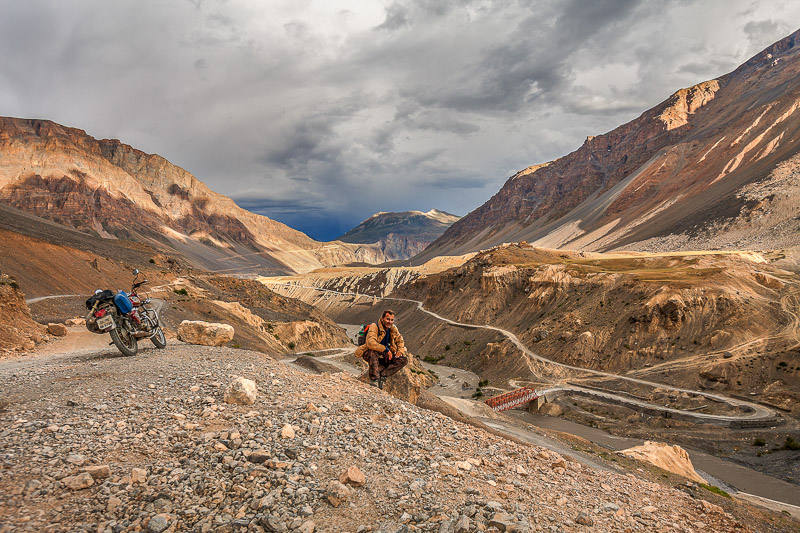 Ominus looking clouds, but no rain. 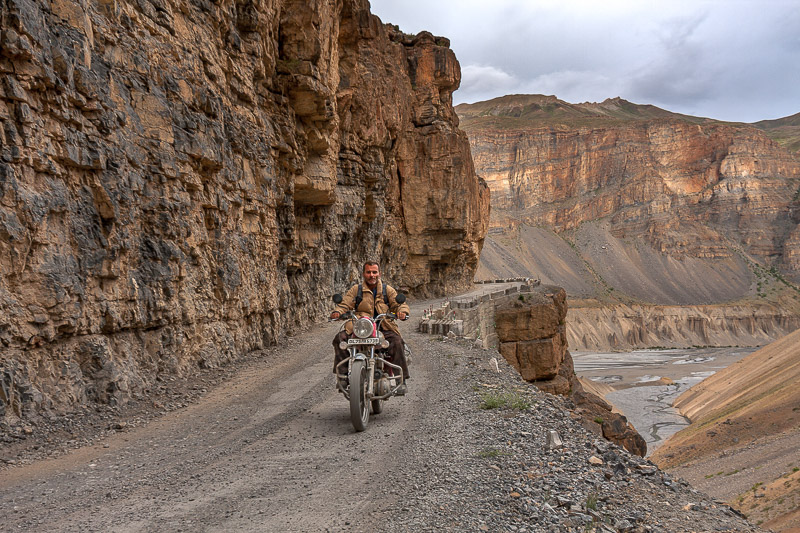 Getting closer to Kaza, food and accommodation awaiting me. 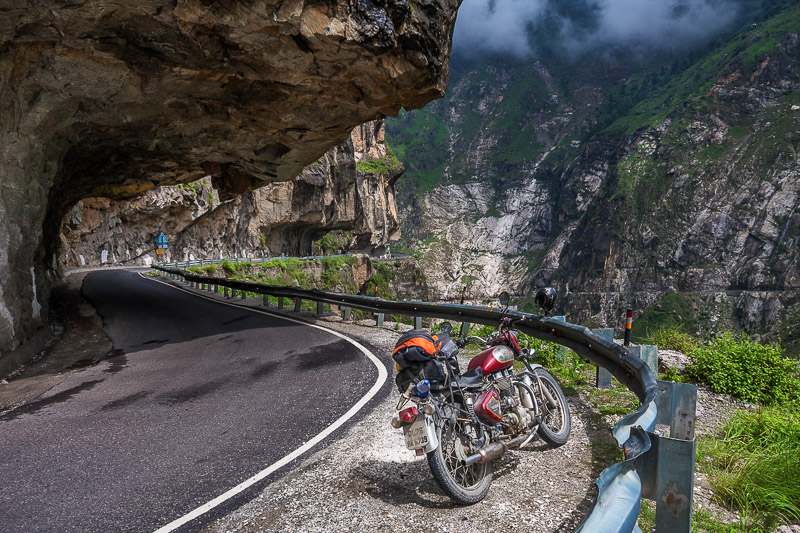 More south, the scenery becomes green again. This road was carved out of the sheer cliff. 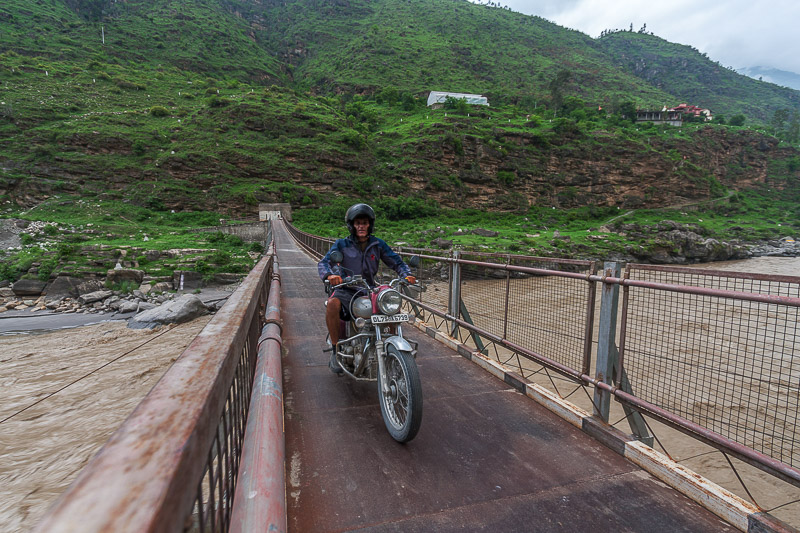 A long and narrow suspension bridge across a raging river. July and August are the rainy season in most of India, but the prime time to visit the Indian Himalayas.

Apart from a few flats, I did not have any mechanical problems with the Enfield. However, the rough roads devastated the bike and by the time I returned it to the shop in Delhi, it was due for a major overhaul. The forks were leaking, making bike feel wobbly, panniers rattled off long way before Delhi and the chain was on its last legs. 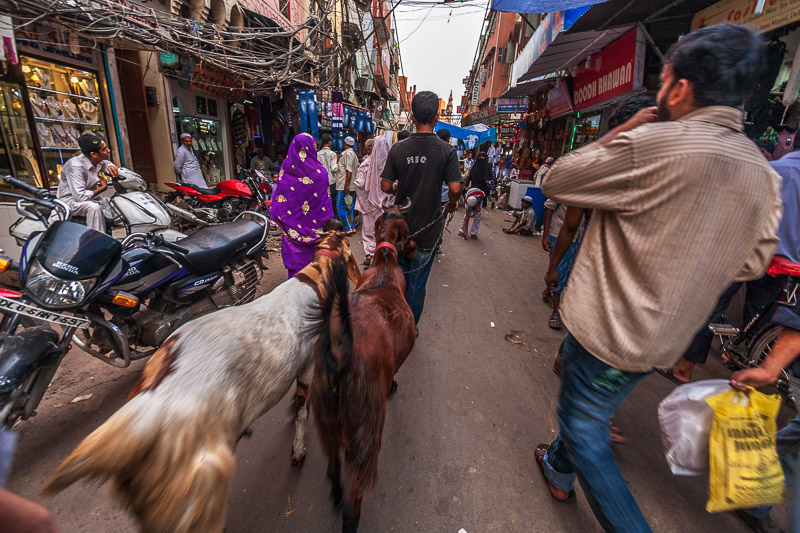 Back to the reality of Indian madness in Delhi.